What’s My Beef with Gluten?? 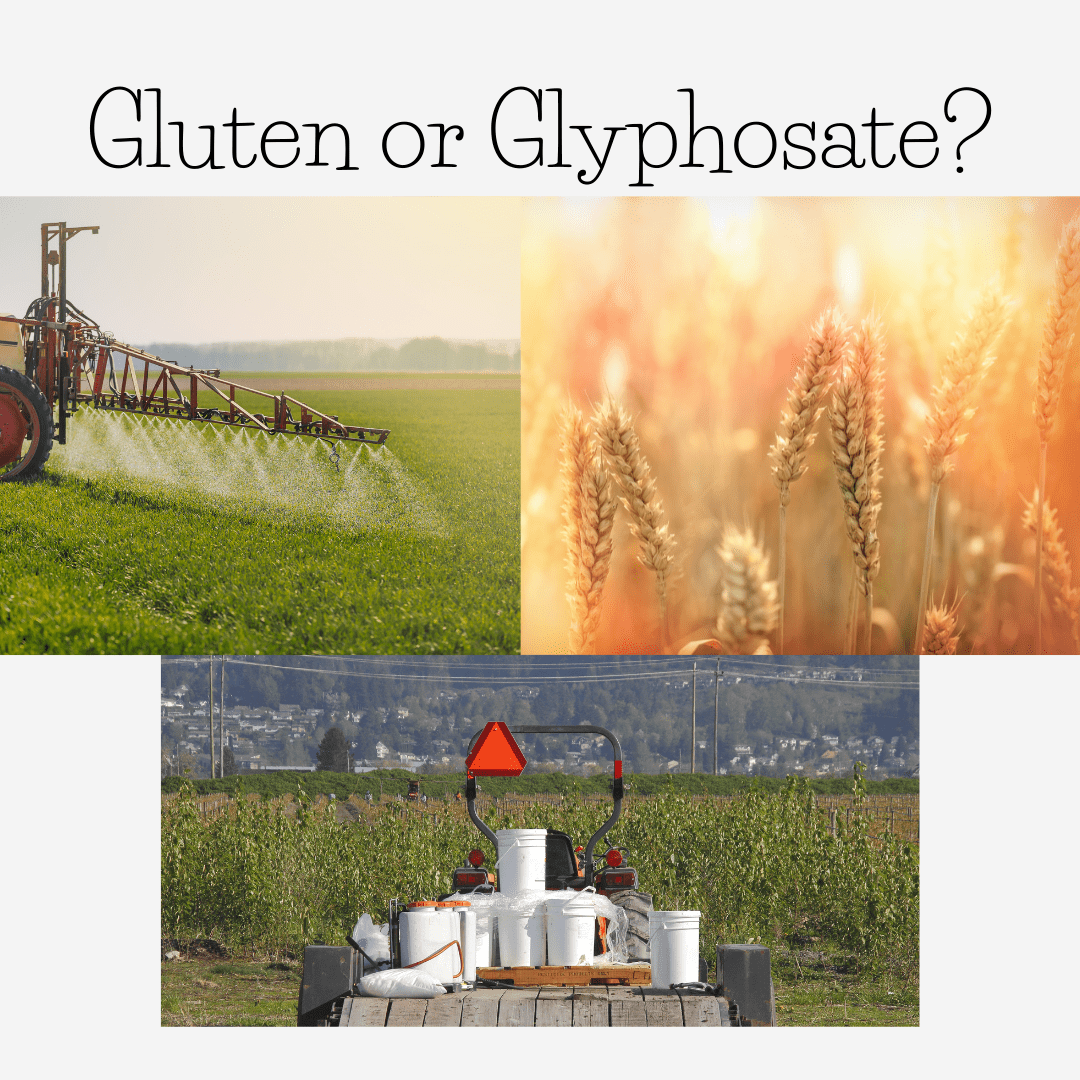 So what’s my beef with gluten??You’ve heard me talk about my dislike of gluten for YEARS, right?!?!Well I think it’s important for you to see the full picture and the WHY.Some will say “eating gluten-free is a fad” or “you don’t have celiac so why eat gluten free?”.  But gluten sensitivity and celiac disease are dramatically on the rise and so are their related conditions like infertility, anemia, cancers, miscarriages, etc.So why are so many reacting to gluten now?

Believe it or not – I don’t believe that gluten is usually the problem! So what exactly is the problem then?Well that would be GLYPHOSATE.  See some research in this study from 2013 to start.What the heck is Glyphosate, you ask?It’s RoundUp® herbicide.Yes, that spray-on herbicide so many use on their beautiful, harmless dandelions in their yard (BTW – a dandelion is one of the most potent liver herbs there is!!  And you can make wine from them!! But that’s for another time:)Glyphosate was patented as an herbicide in 1970 and brought to the market in 1974 by Monsanto but was originally patented in 1961 as a de-scaler of mineral deposits and chelating agent to remove metals from water pipes!  So obviously – let’s spray this on food, right?!  Oy!Why not just choose organic wheat?  Well, since the 1980’s most commercial farmers started an unethical (and illegal) practice of spraying their wheat crops with glyphosate right before harvesting to dry them.  These grains are still considered “organic” because the levels fall under those necessary for that labeling!  You simply cannot get away from glyphosate on wheat in the U.S.

SO, WHAT’S SO BAD ABOUT GLYPHOSATE?Here’s a few things we have learned over the years, especially in relation to gluten sensitivity and celiac disease:1.  Damage to Intestinal Lining: Just like we see damage to the intestines of someone diagnosed with celiac we see almost the identical damage done from glyphosate toxicity (or poisoning) including mucosal fold flattening, microvilli dysfunction and increased mucous production (a sign of inflammation). 2.  Weakens the Liver Detox System: A crucial enzyme system called Cytochrome P450 (involved in pretty much all things in detoxification) is impaired.  This enzyme system is also crucial in detoxifying your estrogens – breaking them down into safe metabolites that would otherwise break down into cancer-causing metabolites. 3.  Disrupts the Gut Microbiome: We see an array of pathogens increase as well as keystone (crucial) species significantly decrease in the gut microbiome.  You cannot have health if you have a disrupted gut microbiome!  If your gut microbiome is not robust then you will also be deficient in neurotransmitters, amino acids, short-chain fatty acids and everything you depend on to be a healthy human being free from disease.4.  Chelates Essential Minerals: Remember when I said it was first patented as a chelator of metals?  Well, just because it is used on foods doesn’t mean that it no longer acts in that manner.  So we see poor essential metal levels in the body like iron, zinc and copper.This list is by no means exhaustive but I wanted you to understand that I think we are dealing with something MUCH bigger and much more ominous here.  Think of how the USDA food pyramid pushes grains (particularly wheat), think of how wheat is in EVERYTHING.  If you’ve ever tried to give it up and started to read labels (which you better be doing!) then you know just how prolific wheat is in products especially those that have no business containing wheat!Monsanto’s glyphosate is finally being held accountable as a cancer-causing agent with major, ground-breaking multi-million dollar lawsuits too!  But Bayer bought them out and just re-branded glyphosate to LibertyLink®!Environmental Working Group has done testing on popular oat products, children’s cereal and more so that you can see how your favorite brands stack up HERE.  It’ll take you down a rabbit hole for sure!If you choose to eat a gluten grain many are choosing Einkorn which is a form of “ancient wheat”.  Some brands are verified “Glyphosate-free” – like this one (no, I don’t make any money on this product 🙂  Why bring this all up now?  Because we MUST understand the gravity of the situation before us.  We are being conditioned to be ill by our governments and corporations.  In essence we are being poisoned into compliance.  Reliance on drugs and meds, on “health” insurance, on life insurance, processed “food”, poor quality “whole foods” due to soils robbed of nutrients, etc., etc., etc.  We are over-fed and under-nourished.  We are more easily manipulated if we are sick and tired.I want you to see your power!  I want you to see that you have choice!  I want you to make a difference in your own life and those around you! The more of us that embrace true health the more powerful we stand together!

Interested in chatting with us further?  Call our office or click on the button below to schedule a zoom call!